Scaevola is a genus of about 70 species, most of which occur in Western Australia. They are mostly small, herbaceous plants distinguished by their fan-shaped flowers.

Scaevola aemula is probably the most commonly grown species. Because of its wide range, a number of forms exist but, in cultivation, it is typically a sub-shrub to about 150mm high by a width of half a metre. The leaves are 10 to 50 mm long, oval or wedge shaped and sometimes toothed. Flowers are seen in spring and summer, are usually pink, mauve or purple (occasionally white) and 25-30 mm in diameter. In recent years a number of selected forms have appeared in the nursery trade with specific flower colour and/or growth habit.

This is a reasonably hardy to very hardy species in well drained, moist soils in temperate climates. However, some care in selection of forms is advisable because those native to semi arid areas may not grow well in areas of high rainfall, and vice-versa. A position in full sun or light shade is usually suitable and the species makes an excellent subject for a hanging basket. 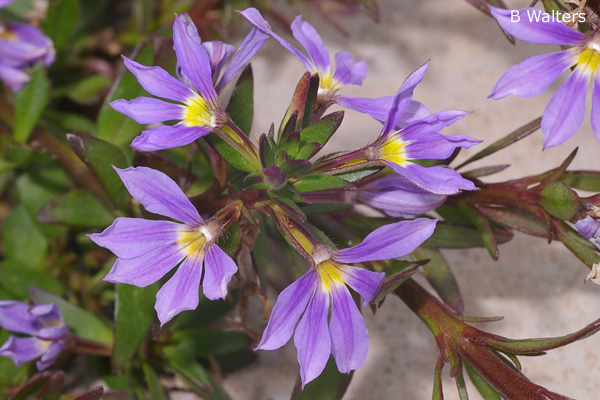