Scaevola is a genus of about 70 species, most of which occur in Western Australia. They are mostly small, herbaceous plants distinguished by their fan-shaped flowers.

Scaevola ramosissima is a common species which is usually found scrambling among other shrubs and grasses but will rarely be noticed unless in flower. It is an open, prostrate plant which is not particularly vigorous and rarely exceeds about a half metre in spread. The foliage is slightly hairy and fairly sparse. Flowers are seen in summer, are mauve to purple and 25-30 mm in diameter.

S.ramosissima is an attractive species which would be a feature in any rockery if it were easy to cultivate. Unfortunately it is not long lived in gardens even in districts of a similar climate to the natural habitat of the plant. 3-4 years would be about the best that can be expected. It is, however, easily propagated and replacement plants can be always available.

Propagation from seed is difficult but cuttings of this and other Scaevola species strike very readily. 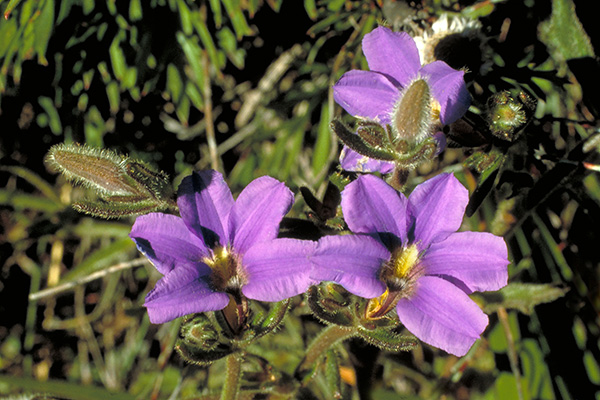