Schleffera is a large genus but only three species are found in Australia. The best known is S.actinophylla (formerly Brassaia actinophylla) which is a plant of tropical rainforests and, in addition to occuring in Australia, can also be found in Papua New Guinea and other islands to Australia’s north. The other species, S.versteegii and S.elliptica also occur in tropical Australia.

Schefflera actinophylla is a tree to 10 metres in its natural habitat. It usually develops a multi-trunked habit with foliage restricted to the top few metres. The common name is derived from the way the large leaflets radiate out from a central stem.

The deep red flowers occur in long racemes from the top of the foliage and it is not unusual for 20 or more racemes to develop from each branch, radiating from the centre like the spokes of a wheel. The flowers, which develop in summer through to autumn, are attractive to honey-eating birds and the fleshy fruits are attractive to fruit-eating birds.

The umbrella tree has been cultivated for many years both in Australia and overseas and is hardy in outdoor areas in tropical and sub tropical areas. It will also grow well in temperate areas if frost is not a problem. The species is also widely used as an indoor container plant in many areas as it tolerates permanent indoor cultivation well. In some areas it can become weedy as the seeds are spread in bird droppings and germinate readily. The species is causing problems in natural areas in some parts of sub-tropical Queensland and in Florida in the USA.

The plant prefers a sheltered, moist area in the garden and full sun should be avoided to avoid damage to the foliage. If a plant grows too tall, heavy pruning to near ground level will induce vigorous new growth.

Propagation can be carried out by either seed or cuttings and no particularly special techniques are required for either method.

* Some confusion exists about the derivation of Schefflera with a number of sources indicating that it was named in honour of Jacob Christoph Scheffler, a 18th century physician. Our advice is that the genus was named in 1775 for Johann Peter Ernst (von) Scheffler by father and son naturalists Johann Reinhold Forster and Georg Forster. (Thanks to David Hollombe for this information). 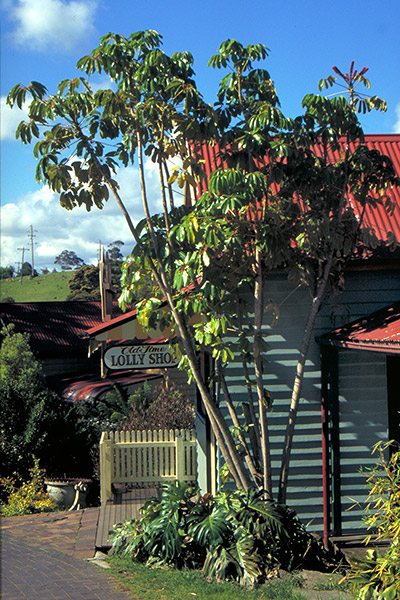 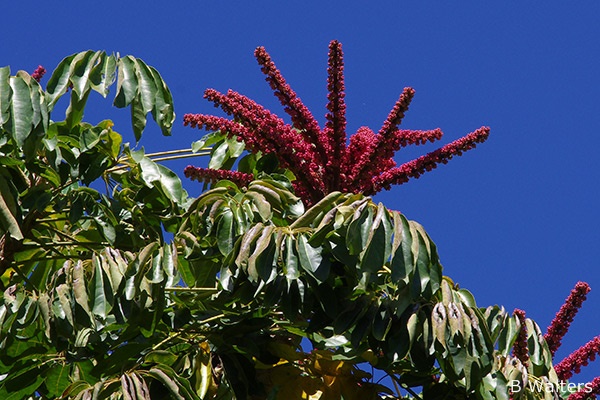