Like most of Australia’s members of the Ericaceae, Styphelia belongs to the subfamily Epacridoideae, which was formerly classified as a separate family, the Epacridaceae. Styphelia is closely related to Epacris, the main difference being the distinctly hairy inner surface of the petals in Styphelia. There are 14 species in the genus, all of which occur naturally only in Australia and in all states except the Northern Territory. They are small, stiff shrubs with small leaves and tubular flowers. The fruit is a greenish-red berry with distinct ribs. This gives rise to the common name “five corners”.

Styphelia viridis is a small and somewhat straggly plant up to about half a metre in height. Two subspecies are recognised; var. viridis and var. brevifolia. The latter differs from the type form mainly in having narrower leaves and smaller floral parts.

S.viridis has stiff stems with small, lance-shaped leaves up to 15-25 mm long by about 5 mm wide. The flowers are usually bottle green to yellow green with rolled-back petals revealing the hairy inner surface. Flowers appear from autumn to spring and are frequented by honey-eating birds.

Like other members of the genus, S.viridis is not often seen in cultivation except in the gardens of enthusiasts. The species should be given a moist, well drained position, preferably in semi shade.

Propagation is usually by cuttings of firm current season’s growth and improved results have been reported when a root-promoting hormone is used. The species can be grown from seed but this is not readily available. 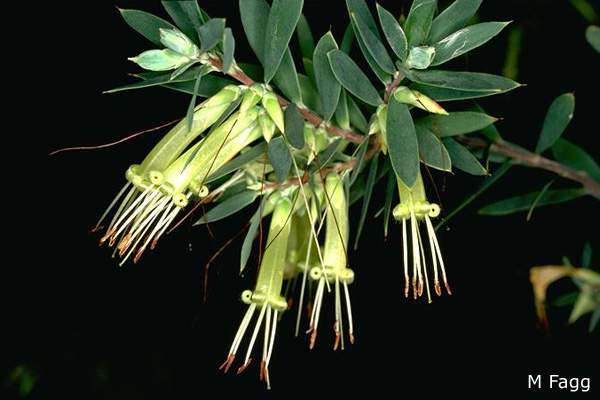