Verticordia is a genus of very showy Australian plants, a number of which are well know in the cut flower trade. The vast majority are confined to Western Australia with two or three occurring in other states. The genus has undergone botanical revision in recent years and 99 species are now recognised. The popularity of some species for floral arrangements has resulted in overpicking from the wild and research into farming of selected forms is being undertaken. The plants are commonly referred to as “morrisons” or “feather flowers”, due to the fringed calyx lobes.

In a genus with so many spectacular flowering plants, V.grandis must rate as one of the most spectacular. It is a small to medium shrub, usually about 1 metre in height but which may reach 2 metres. It has small, stem-clasping, rounded leaves which are grey-green in colour. The 5-petalled flowers are large for the genus being about 20-25 mm in diameter and deep scarlet in colour. Flowers are generally seen in spring and early summer.

Being native to a Mediterranean-type climate of very dry summers and wet winters, verticordias, in general, have not proven to be easily cultivated in more humid climates. V.grandis is no exception, however, it has been successful in Sydney in a very well drained, raised garden bed in an open situation. In drier climates, cultivation is reasonably successful.

Propagation can be carried out from seed but germination can be erratic and slow, sometimes taking well over a year. Cuttings of hardened, current season’s growth can be successful may may not give a high percentage strike. The use of a root-promoting hormone seems advantageous. Because of the horticultural potential of V.grandis and other members of the genus, some research into grafting has been carried out. This is showing some success using Darwinia citriodora or Chamelaucium uncinatum (Geraldton wax) as rootstocks. 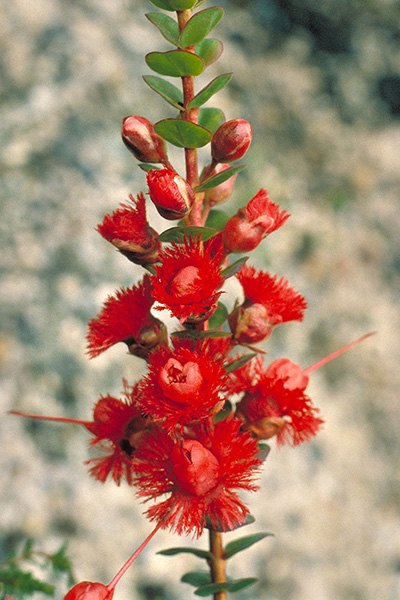