The genus Viola is widespread throughout the northern hemisphere, mainly in temperate regions. There are over 500 species. The genus is poorly represented in the southern hemisphere and only a few species are native to Australia. The best known of the Australian species is Viola banksii, the ‘native violet’, which is widespread in cultivation in both native and mixed gardens. Until recently the commonly grown native violet was referred to as Viola hederacea. However, research has shown that the commonly grown plant is different to the true V.hederacea. V.banksii was originally collected by Joseph Banks and Daniel Solander at Botany Bay in 1770.

Viola banksii is a herbaceous plant of prostrate habit, spreading by layering stems. The bright green leaves are kidney-shaped and about 15 – 25 mm in diameter. Purple and white flowers appear singly on stems about 150 mm high and occur throughout the warmer parts of the year. Single plants can spread to cover very large areas, particularly in moist positions.

This is a very hardy plant in a range of climates. It prefers, moist locations in a sunny or semi-shaded location. In full sun the leaves lose some of their lush appearance. In the garden it is a useful plant as a groundcover between taller growing species but can easily overwhelm any slow growing prostrate plants. It is also very suitable as a container plant, particularly in hanging baskets.

Propagation is best carried out by division of established plants. Provided the divided clumps have a few roots, they will quickly establish in other parts of the garden or in pots if keep watered. 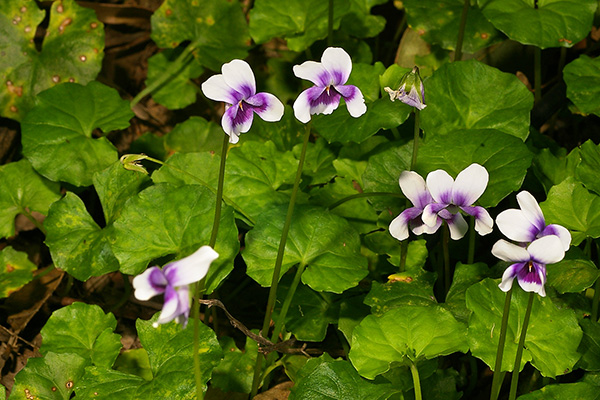