Zieria is a genus of about 44 species, all but one endemic to Australia (one species occurs in New Caledonia). The genus is closely related to the much better known Boronia from which it differs in having 4 rather than 8 stamens. Generally, zierias are not popular in cultivation because they generally have smaller and less colourful flowers than Boronia.

Zieria granulata occurs in the Illawarra region of New South Wales where it is known from about 70 locations over a range of about 20 km in the Shellharbour/Kiama area. One or two populations occur within Budderoo National Park to the west of Jamberoo. A population further north at Kanahooka (near Lake Illawarra) is believed to have become established there through fill material brought in from the southern habitat.

Zieria granulata is a small to medium shrub reaching 1.5 – 3 metres. Leaves are 3-lobed with long linear leaflets to about 40 mm long with margins that are revolute (curved under). The leaves have conspicuous oil glands that give the leaves a ‘warty’ appearance and they have a very strong aroma when crushed. The small flowers (about 4 – 5 mm diameter) occur in clusters from the leaf axils and are white with four petals. They occur in late winter and spring.

This species has been grown in cultivation for a number of years and it has proven to be very hardy in well drained soils in full sun or (preferably) semi shade. It withstands extended dry periods without supplementary watering and is tolerant of at least moderate frost. Light pruning after flowering will help to maintain the plant as a bushy, compact shrub.

In common with most members of the Rutaceae, propagation of Z.granulata from seed is difficult but cuttings usually strike readily from current season’s growth. 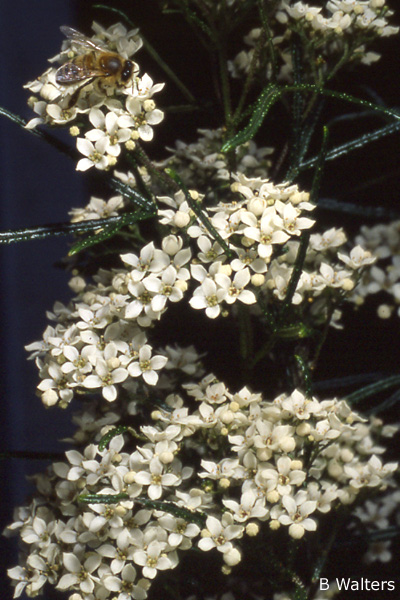