George Bentham in 1867 established a broad concept for the genus Baeckea but in recent years studies have shown that, because of differences in the group, many Baeckea species should be placed into other genera, including Ochrosperma, Triplarina, Babingtonia, Euryomyrtus, Kardomia, and Sannantha. Baeckea linifolia is one of a number of species that remained within Baeckea. Further information on the taxonomy of the genus Baeckea and related plants can be found in Geraldton Wax and its Relatives – Background.

B.linifolia is a weeping shrub 1.5 to 2 metres high, usually of “tree” shape with a bare trunk. Leaves are linear and between 6 to 18 mm long and 0.5-1 mm wide. The small tea tree-like flowers are about 5 mm in diameter, white in colour and occur in a massed display along the weeping branches. Flowering occurs in summer.

This species is reasonably well known in cultivation. It is a very hardy plant in most reasonably drained soils, preferably in full sun of dappled shade. It is tolerant of at least moderate frost and withstands extended dry conditions well, once established.

Seed germinates well without pretreatment but is difficult to collect as it is released from the small seed capsules when ripe. Cuttings of firm, current season’s growth strike readily. 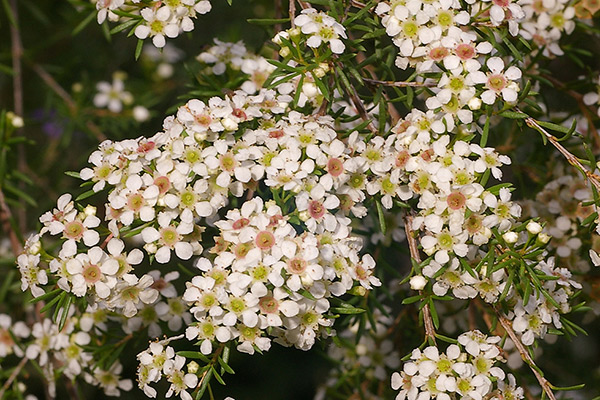