Banksia borealis has been in cultivation among enthusiasts for some time but it has only recently been formally named. There are two recognised subspecies; subsp.borealis occurs in the Kalbarri area about 400 km north of Perth while subsp.elatior occurs about 200 km further south in a restricted area near Three Springs. The former subspecies differs from subsp.elatior in being a smaller plant overall and having leaves which have a distinct twist. B.borealis subsp.elatior is regarded as being endangered.

The typical form is a small shrub to about 1 metre in both height and width. The leaves are around 90 mm long by 30 mm wide but deeply lobed almost to the mid-rib. As indicated above, a distinctive feature is the spiral twisting (between 1 and 3 times) along the length of the leaves. B.borealis subsp. elatior is a larger plant reaching 2.5 metres in height.

The flowers clusters of B.borealis are bright orange-yellow and around 30-35 mm in diameter. They are conspicuously displayed either at the ends of stems or in the leaf axils and are seen in late winter through to late spring.

B.borealis is not well known in cultivation but is a very desirable plant which has proven itself to be hardier than many other in the former genus Dryandra in sub-tropical areas. It has been flowered successfully in Sydney in a well drained sunny position. 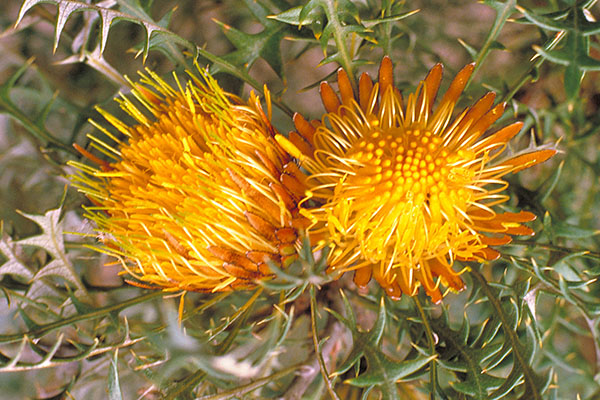