Banksia cuneata, B.ilicifolia and B.oligantha are three species which comprise a distinctive group within the genus Banksia. The flower clusters of these three species resemble those of the ‘Dryandra Group’ – species in the former genus Dryandra) but lack the overlapping, scale-like bracts which surround the clusters and often form a conspicuous part of the inflorescences of that group. Of the three species, which occur naturally only in Western Australia, the matchstick banksia has the most potential as a garden plant. It is typically a large shrub or small tree to about 4 metres high. Bark is smooth and grey and the prickly, wedge-shaped leaves grow to 4 cm in length, resembling holly leaves. Flowering has been recorded in late winter as well as spring. The inflorescences, which can be very numerous, are most attractive in late bud, pinkish with pale green limbs. They produce copious amounts of nectar.

Banksia cuneata grows in yellow-brown sands in shrubland, with Banksia prionotes and Xylomelum angustifolium. It is one of the most sensitive banksias to dieback, and is only known from a handful of populations near Quairading in Western Australia’s central wheatbelt. Furthermore, much of the land nearby is heavily cultivated and weed-infested in places. The plant requires fire to regenerate at certain intervals as its seedpods remain closed until burnt. It is non-lignotuberous and hence can be eliminated from its habitat through fires which occur too frequently (ie. it requires sufficient time between fires for seedlings to reach maturity, flower and set seed).

Ironically, the species has some weed potential; Kingsley Dixon of the Western Australian Herbarium reports that it was once trialled as a cut flower crop in Moore River north of Perth and plants naturalised there.

In cultivation, B.cuneata requires a sandy, well drained soil and a sunny aspect. A tub or large container may be appropriate if local soils are too heavy. It is a rapidly growing species and can be very showy, although cut flowers are reported to drip a lot of nectar!. To date the plant hasn’t been tried in areas of summer humidity, though presumably it would be difficult to grow there. 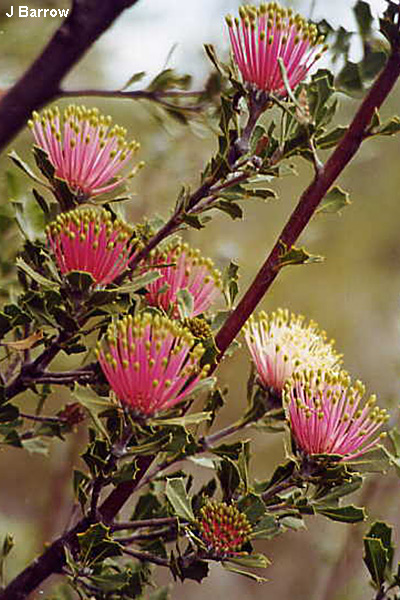