Banksia media is a shrub to about 4 metres but can grow taller. A prostrate form from the south coast of Western Australia retains the low habit in cultivation. The leaves are broad with toothed margins. The cylindrical flower spikes are conspicuous and bright yellow in colour about 150mm long by 70-90mm diameter at flowering. They are seen in early winter and may continue through to spring. The seeds are enclosed in follicles attached to a woody cone and are generally retained within the cone until burnt. The species is closely related to B.praemorsa and B.epica, the latter being a much rarer species which occurs in the same general geographic area as B.media.

B.media is probably the hardiest of the Western Australian Banksias in areas with humid summers. Plants have been grown and flowered successfully in Sydney for many years in sunny, well drained positions. A particularly attractive feature of the plant is the inflorescences at the bud stage; the contrast of the dark tipped styles with the yellow of the flowers is very striking. The prostrate form has received limited cultivation but it is not known if it is as hardy as the more common, upright form.

Propagation of B.media from seed is relatively easy but cuttings may be difficult to strike. 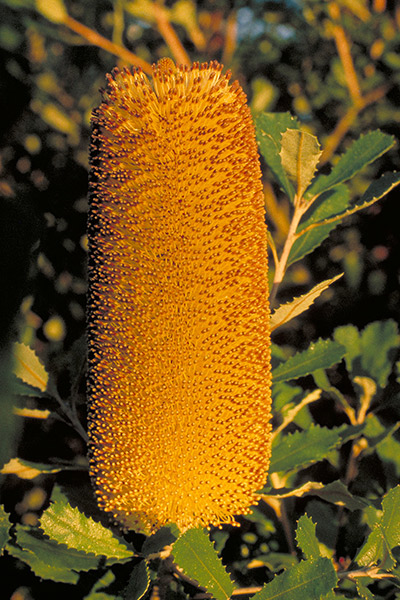