As a result of the transfer of the genus Dryandra to Banksia, Dryandra longifolia was renamed Banksia prolata as the name Banksia longifolia had been previously applied to a plant taxon, although the name B.longifolia is not current.

Banksia prolata is a small to medium shrub 0.4 to about 3 metres high. The linear-shaped leaves are up to 300 mm long with stiff, triangular lobes along their length. The individual small flowers occur in bright yellow inflorescences on short branches. Flowering occurs from early winter to mid spring.

There are three recognised subspecies: subsp. prolata, subsp. archeos and subsp. calcicola. Differentiation between the subspecies is difficult to the non-botanist.

B.prolata has been grown by enthusiasts for some years but is not widely cultivated. It has succeeded in areas without humid, wet summers but can be expected to be difficult to maintain in humid temperate and tropical areas. Excellent drainage and a sunny location are preferred. 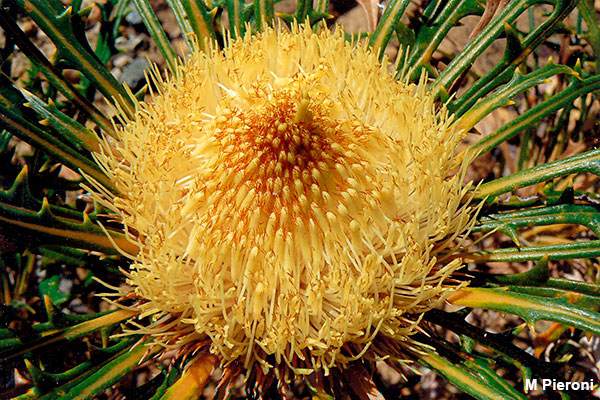