Banksia serrata is a widespread species in eastern Australia, extending from southern Queensland along the coast to Wilsons Promontory on Victoria’s south coast. There is also a population across Bass Strait in northern Tasmania. The plant occurs as far inland as the Great Dividing Range.

The “old man banksia”, as it is known to many Australians, is very similar to B.aemula (the “wallum banksia”) and can be difficult to distinguish from that species. B.aemula is generally a smaller plant but the principle difference between the two species is the shape of the pollen presenter, the enlarged part of the style of the flower. In B,aemula the pollen -presenter is short and dome-shaped while in B.serrata it is long and narrow (as shown in the diagram). In the few locations where B.aemula and B serrata occur together (as at Agnes Banks, west of Sydney), hybrids have been observed.

B.serrata is normally a tree which may reach 15 metres in height in favourable conditions. Sometimes it is much lower, forming a gnarled and stunted small tree with blackened rough bark as a result of surviving many bushfires. Although the species does not develop a lignotuber, the thick rough bark allows it to regenerate by sending out epicormic shoots from beneath the bark a week or so after the fire has passed. In exposed coastal areas the plants may develop a prostrate habit of growth and these forms generally retain that habit in cultivation away from the coast (eg Banksia serrata “Austraflora Pygmy Possum”, a form from the south coast of New South Wales).

The flower spikes of B.serrata are about 100mm wide by about 120 mm long. They are usually cream in colour and are followed by seed cones with large protruding follicles. The leaves are large and stiff with serrated edges.

The species is relatively easy to cultivate in many areas of Australia, though it prefers soils to be sandy rather than clayey and requires good drainage. This is a plant that really adds character to an Australian native garden!

Propagation from seed is reliable without pre-treatment. Usually only a proportion of seedlings propagated from the low growing forms retain the low habit. These forms need to be propagated by cuttings which may be slow to strike. 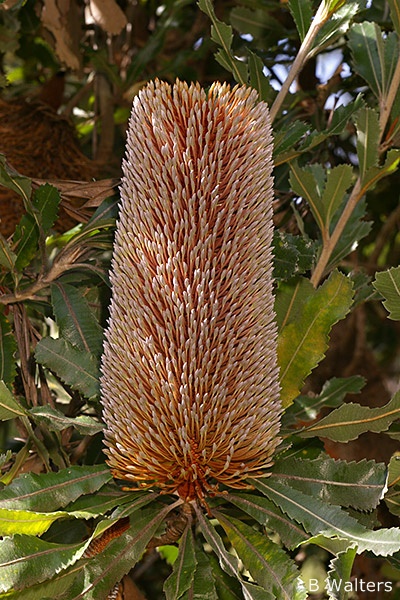 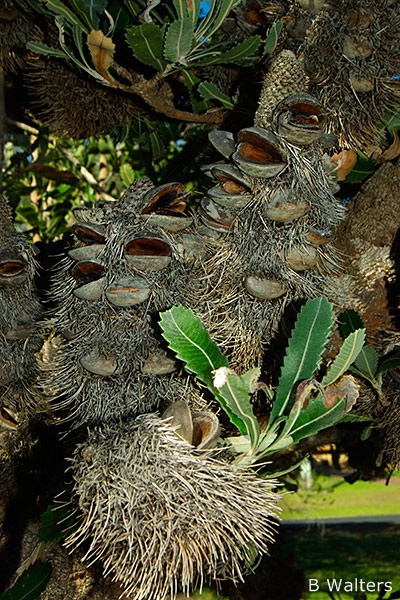