Eucalyptus erythrocorys is one of the most spectacular of the eucalypts when in flower. The flower may be 7 cm across with four tufts of golden stamens at each of the “corners” and are in groups of three. The flowers are preceded by large rectangular scarlet buds and are followed by large helmet-shaped fruits. There may be so many of them that they weigh the tree down.

The foliage of Eucalyptus erythrocorys is dark green and the leaves are sickle-shaped. The bark is creamy with a few rough patches of loose brown bark.

The form commonly grown in Perth grows to a small tree about 4 m high. It often spreads because of the weight of the fruits and is prone to breakage in storms. However it responds well to pruning. Dwarf mallee forms occur south of Shark Bay but it is not known whether this form is retained in cultivation. Taller forms occur near Eneabba.

llyarrie is a member of the sub-genus Eudesmia. One of the obvious characters of this group is that the stamens are in four bundles each at the corner of the squarish flower. It is in a sub-group that includes E. pleurocarpa.

Flowering occurs from late summer to early autumn – February to AprIl in Perth.

E.erythrocorys is widely grown in Perth, in Wheatbelt towns in Western Australia and in South Australia. It commonly grows on limestone soils and is well adapted to alkaline conditions. It responds well to pruning.

Propagation is from seed which germinates readily. Viable seed is best obtained from a group of trees so that crossing is enabled. 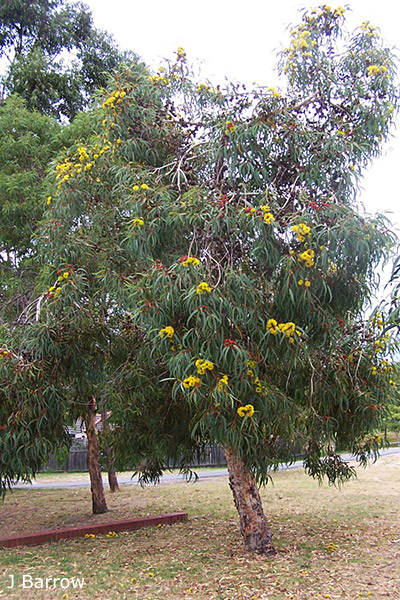