One of the most widely cultivated of all grevilleas, G.banksii is also a parent of an increasing number of hybrids. Typically G.banksii is a large, spreading shrub to around 3 metres and this is the form best known in gardens (sometimes called “variety “Forsterii”). However, this form is not known in the wild and its origin is uncertain. An upright form which reaches small tree proportions is found in areas around Townsville and Maryborough in Queensland while prostrate forms can be found along the central Queensland coast and adjacent islands.

All forms have silvery-green, much divided foliage and flowers in large clusters at the ends of branches. The flower colour is usually deep red but white forms are also known. Flowering usually occurs in spring although the commonly grown form may flower for much of the year.

G.banksii is a hardy plant for warm climates where it performs best in reasonably well-drained soils in full sun. The “tree form” seems to be more difficult to establish than the shrubby forms. Plants may be damaged by moderate frosts.

Commonly grown hybrids which have G.banksii as one parent include “Misty Pink”, “Robyn Gordon”, “Superb”, “Ned Kelly”, and “Pink Surprise”.

Propagation is best from cuttings although seed is also successful. 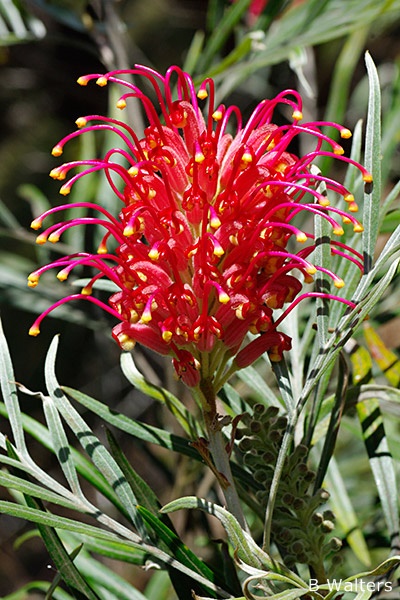 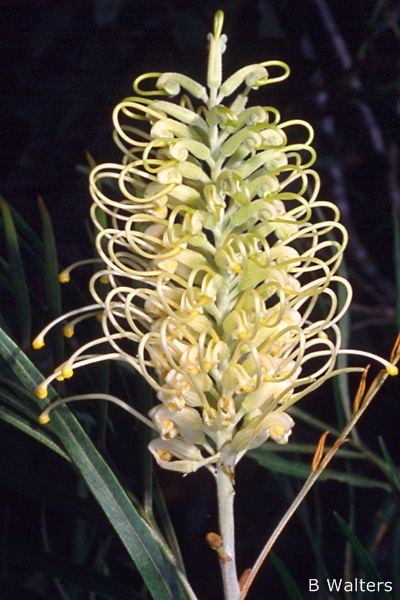