Grevillea “Robyn Gordon” is one of several similar hybrids. It is a chance hybrid that arose in the garden of the late David Gordon of Myall Park, Glenmorgan, Queensland. David Gordon was a plant collector with an extensive collection of Grevillea species which (according to legend) he planted in alphabetical order by species. This meant that the Queensland species, Grevillea banksii, was planted in close proximity to the Western Australian species, G. bipinnatifida. A plant that was later to become the cultivar “Robyn Gordon” (named after David and Dorothy Gordon’s daughter) arose by chance near these two parent species.

Once released into wider cultivation, G. “Robyn Gordon” quickly established itself as one of the most popular of all Australian plant cultivars due to its attractive foliage, spectacular deep red flowers and moderate size of about 1.5 metres high by a similar width. Its year-round flowering habit in many districts also added to its popularity, which continues today despite the subsequent appearance in cultivation of several other cultivars which have a similar parentage. These include: Grevillea “Coconut Ice”; “Grevillea “Judith Anne”; Grevillea “Ned Kelly”; Grevillea “Peaches and Cream”; and Grevillea “Superb”.

All of these cultivars are bushy shrubs with attractive lobed foliage. The older cultivars (“Robyn Gordon”, “Superb”, “Ned Kelly” and “Coconut Ice”) have proven to be reliable in a wide range of climates and soils and there is every reason to expect the newer forms to be equally hardy. Pruning is usually not required but plants can tolerate moderate to heavy pruning if necessary. A sunny, well drained position is preferable in the garden and plants are tolerant of at least moderate frost. Fertilisers containing phosphorus are best avoided. The flowers attract honey eating birds. 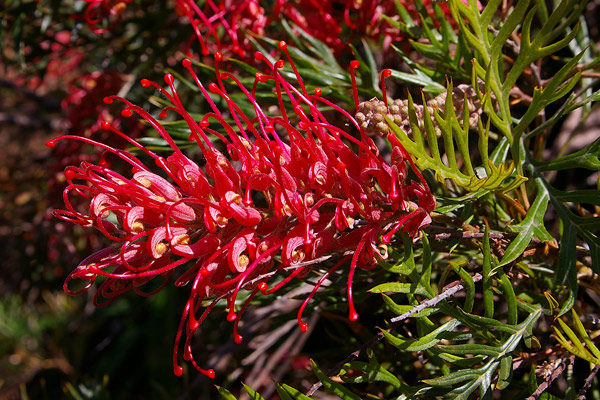