Grevillea ‘Poorinda Blondie’ is one of a large number of ‘Poorinda’ cultivars that were released to the horticultural trade during the 1970s and 1980s. While some of these have become well entrenched in cultivation, many were not especially notable and have tended to be superseded by more recent cultivars. Some of the better ‘Poorindas’ include ‘Poorinda Royal Mantle’, ‘Poorinda Queen’, ‘Poorinda Elegance’, ‘Poorinda Constance;’ and ‘Poorinda Blondie’.

Grevillea ‘Poorinda Blondie’ is apparently a chance seedling from the plant widely cultivated for many years as G.hookeriana but which is, in fact, a hybrid itself and now known as G. ‘Red Hooks’. Grevillea ‘Poorinda Blondie’ is a large shrub which can reach 3 metres high by a spread of 3-4 metres. The leaves are about 15 cm long x 4.5 cm wide, deeply lobed, dark green above and silky below. The flowers are typical of the “toothbrush”-flowered grevilleas where the individual flowers are arranged in a terminal one-sided raceme. The most striking feature is the colour which is a straw-yellow darkening to an orange yellow.

The plant is a hardy and reliable cultivar in most reasonably drained soils in full sun or semi-shade. It is a large plant and does require room to expand although it responds well to pruning. It is tolerant of at least moderate frosts and is an excellent screening plant.

Although G. ‘Poorinda Blondie’ produces viable seed, this will not come true to type. Offspring may have different flower colour and growth habit to that of the parent plant. Propagation is reasonably easy from cuttings of hardened, current season’s growth. 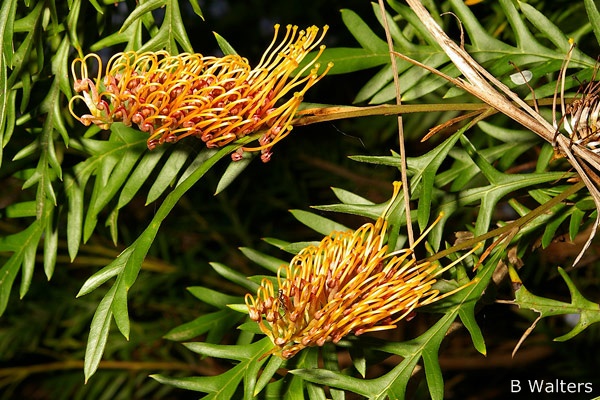