Grevillea ‘Poorinda Royal Mantle’ is apparently a garden hydrid whose parents are believed to be G.laurifolia and G.willisii. It is a spreading, prostrate shrub which can reach 3 metres or more in diameter. The leaves are about 15 cm long x 4.5 cm wide and may be lobed or entire. The flowers are typical of the “toothbrush”-flowered grevilleas where the individual flowers are arranged in a terminal one-sided raceme. In ‘Royal Mantle’, the colour is a bright, tomato red and appear in spring and summer.

The plant is a hardy and reliable cultivar which is extensively cultivated in a wide range of climates. It requires reasonably drained soils in full sun or semi-shade. It is a large plant and does require room to expand although it responds well to pruning. It is tolerant of moderate to heavy frosts.

G. ‘Royal Mantle’ rarely, if ever, produces viable seed but, if it does, seed will not come true to type. Propagation is reasonably easy from cuttings of hardened, current season’s growth. Grafting onto tall rootstocks of G.robusta has been carried out fairly extensively to produce a weeping standard. 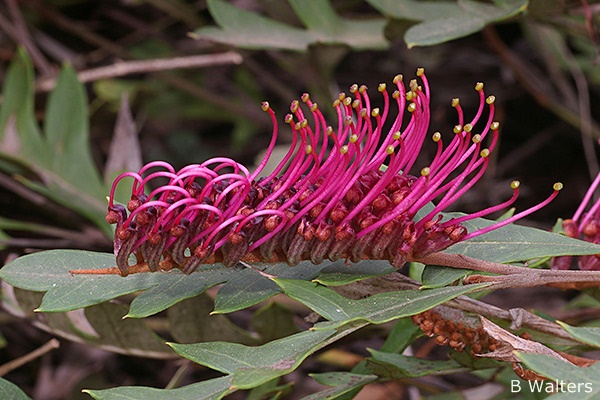