Leptospermum ‘Aphrodite’ is one of a number of colourful cultivars developed at Bywong Nursery at Bungendore, New South Wales. It apparently arose in a batch of seedlings of Leptospermum spectabile. L. ‘Aphrodite’ is a medium shrub which grows to about 2 – 2.5 metres high with narrow, lance-shaped leaves to about 15 mm long. The 5-petalled, pink flowers are larger than is typical for the genus being about 20 mm diameter with numerous small stamens surrounding the central stigma. The flowers which appear in spring have a green centre and are followed by woody fruits containing many seeds; the fruits remain unopened until they are removed from the plant or the plant dies.

Leptospermum ‘Aphrodite’ is a very attractive cultivar which should become very popular in cultivation. Based on the characteristics of its parent, the cultivar can be expected to be a hardy shrub for moist soils in temperate climates. Plants prefer full sun or partial shade and may be pruned severely if necessary.

This cultivar is protected by Plant Breeders Rights and cannot be propagated commercially without approval. Home gardeners can, however, propagate plants for their own use. To retain the characteristics of the cultivar, propagation by cuttings is needed. Cuttings of hardened, current season’s growth strike readily. Propagation is easy from seed but seedlings will vary in characteristics from the cultivar and cannot be named ‘Aphrodite’. 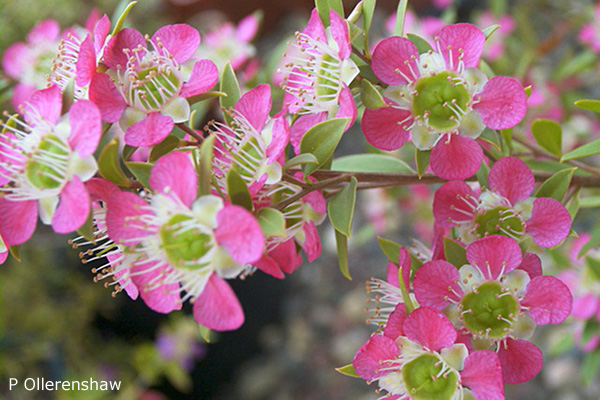