Leptospermum spectabile is a relatively recently named species (1989) and it is sometimes still known under the name Leptospermum sp “Colo”. It is usually a medium shrub to about 2.5 metres with dark green, narrow, lance-shaped leaves to about 30 mm long. The 5-petalled, deep red flowers are larger than is typical for the genus being about 20 mm diameter with numerous small stamens surrounding the central stigma. The flowers which appear in spring have a green centre and are followed by woody fruits containing many seeds; the fruits remain unopened until they are removed from the plant or the plant dies.

L.spectabile is becoming well known in cultivation and it is proving to be a hardy shrub for moist soils in temperate climates. Plants prefer full sun or partial shade and may be pruned severely if necessary. The species is being used in hybridisation work and is one of the parents of several cultivars including ‘Aphrodite’, ‘Merinda’ and ‘Rhiannon’.

Propagation is easy from seed which does not require any pretreatment. Cuttings are also successful and this is the only method that should be used for propagation of cultivars. 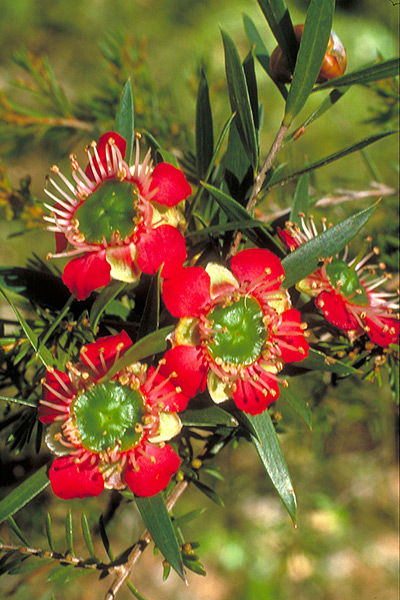