Leptospermum ‘Rhiannon’ is one of a number of colourful cultivars developed at Bywong Nursery at Bungendore, New South Wales. It is a hybrid between between Leptospermum rotundifolium and Leptospermum spectabile. L. ‘Rhiannon’ is a medium shrub which grows to about 2 metres high with an upright growth habit. It has narrow, lance-shaped leaves to about 10 mm long. The 5-petalled, mauve-pink flowers are larger than is typical for the genus being about 20 mm diameter with numerous small stamens surrounding the central stigma. The flowers have a green centre and are followed by woody fruits containing many seeds; the fruits remain unopened until they are removed from the plant or the plant dies.

Leptospermum ‘Rhiannon’ is a very attractive cultivar which should become very popular in cultivation. Based on the characteristics of its parents, the cultivar can be expected to be a hardy shrub for moist soils in temperate climates. Plants prefer full sun or partial shade and should be pruned after flowering to promote dense growth and promote flowering for the next season. The flowers which arrear in spring are reported to be long lasting and suitable for use as a cut flower. 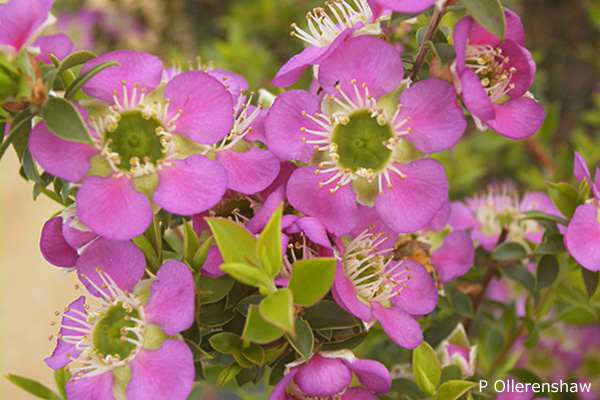