Leptospermum polygalifolium is a shrub, often 0.5 to 3 metres in height , or a slender to stout trunked tree to 7 metres or more, the bark usually being close and firm but soft, thick and flaky in some forms. The young stems, at first, have a close pubescence but usually become glabrous, with a conspicuous flange near the node and spreading and tending to curve around the stem. Leaves are sometimes aromatic, but not strongly, and are usually from 5 mm to 20 mm long, oblanceolate-elliptical to narrowly linear-elliptical, flat or with the margins recurved, the tip often recurved with a soft or sharp point or, occasionally, a short pungent point. Flowers are usually white but may be greenish, off-white to pale pink and are usually 10 to 15 mm in diameter, occurring singly on modified shoots on the ends of very short or long branches, often in adjacent axils and on adjacent branches with new growth extending, mostly from branch ends, during or after flowering. Flowering occurs in late spring to early summer.

In 1989, Thompson named 6 subspecies as follows:

This is a complex group with widespread intergradation between the various forms. It is possible that further revision of the species will occur in the future.

Leptospermum polygalifolium has been used as garden plant for many years, both as a specimen planting and in conjunction with other plants in group plantings. It is hardy and can be relied on to produce a good display of flowers each year. It is sometimes grown as a hedge plant but, in this situation it prefers light pruning as it sometimes does not respond well to heavy pruning. It is generally long-lived but can become a bit straggly with age as some of the lower branches are shed.

There are 3 known forms of L.polygalifolium subsp. tropicum which are used as garden plants:

L.polygalifolium has been used in hybridisation work and is one of the parents of the cultivars ‘Outrageous’ and ‘Tickled Pink’. It is also thought that the popular cultivar L. ‘Pink Cascade’ is a natural hybrid of L.polygalifolium and L.continentale. It exhibits similar habits to L. ‘Pacific Beauty’ but the young growth is red and the flowers are pink to about 15 mm in diameter.

All forms of L.polygalifolium can be propagated easily from seed or from cuttings of medium hard wood which will strike fairly easily. Named cultivars such as ‘Pacific Beauty’ should only be propagated from cuttings as seedlings may vary significantly from the parent plants. 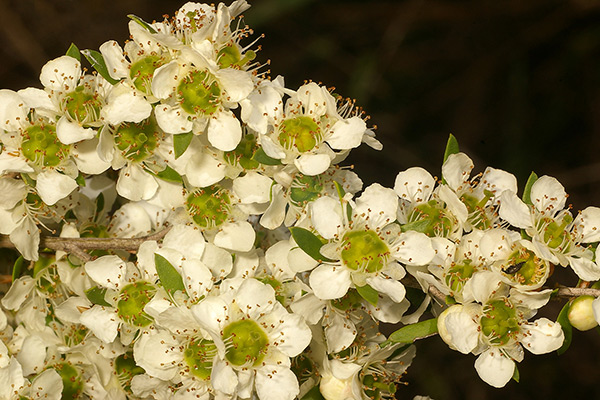