Pelargonium is a well known genus in horticulture with numerous cultivars of exotic species (mainly South African) being grown in gardens worldwide. There are about 7 Australian members of the genus; P.australe is the best known and most widespread.

Pelargonium rodneyanum is a small, perennial herb to about 0.4 metres high. The leaves are soft, light to dark green in colour and oval shaped with shallow lobes. The deep pink flowers appear in summer and autumn on slender stalks above the foliage in groups of 2 to 7. The plant has a tuberous root system.

This is a plant worthy of widespread cultivation. It is popular among native plant enthusiasts but is not seen much in more general gardens. It is hardy in a range of soils provided they are reasonably well drained. It withstands at least moderate frost and is drought resistant once established. It prefers a sunny or slightly shaded position.

P. rodneyanum is best propagated by division of the tubers once the plant has reached a reasonable size. The divisions will establish new plants if treated as for cuttings in a sheltered, moist environment until new roots are established. Seed should also be successful but is rarely available. 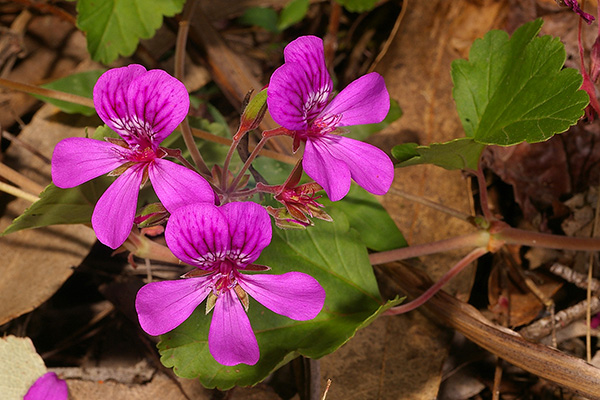