Phebalium nottii is unusual (but not unique) in the genus in having pink flowers. The species is a small shrub, usually less than 1 metre in height which occurs in fairly dry situations in open shrublands or woodlands. Although not regarded as being at risk, it is not a commonly seen species in the wild. One of the best locations to view the species is at the Gilgandra Flora Reserve in the central west of New South Wales. An unusual feature of the flowers is the arrangement of the yellow stamens which are offset to one side. This is not characteristic of most other members of the genus, except for P.woombye. Flowering occurs in late winter – spring.

Because of the attractive flowers and habit of the plant, many attempts have been made to bring P.nottii into cultivation, with only limited success. It is really only suitable for growing by enthusiasts.

In common with most members of the Rutaceae, propagation of P.nottii from seed is difficult but cuttings usually strike readily. Some experimentation has been carried out into grafting P.nottii onto the hardier P.squamulosum. This combination survived and flowered for several years and suggests that there is scope for further research into grafting of this species. 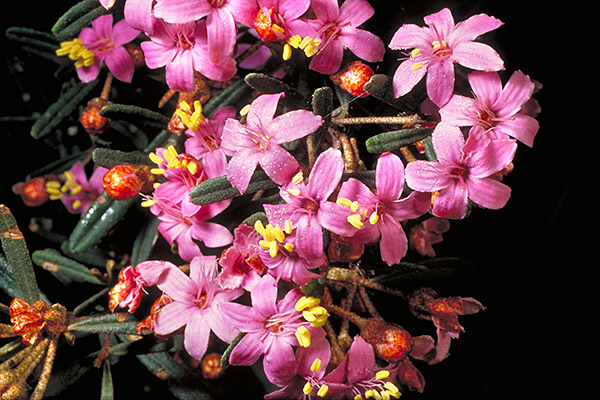