Banksia oblongifolia was previously known as Banksia aspleniifolia in New South Wales, however upon review of historical data, Alex George found that the latter name had been inadequately described and was hence invalid. The species is a lesser known close relative of Banksia robur, with which it hybridises in several areas on the east coast (Caloundra, Queensland; Bulli, New South Wales) and B.plagiocarpa, from North Queensland.

Banksia oblongifolia may also be confused with Banksia paludosa which is found in similar areas along the New South Wales coast. However it may be readily distinguished from that species by its reddish-brown hairy new growth and naked old spikes; those of B.paludosa are typically longer and thinner with old flower parts remaining on the spike.

B.oblongifolia is typically a fairly open, multistemmed shrub to around 1 to 1.5 metres high by a similar spread when found in coastal heathland but may grow taller in forested areas, to 3 metres or so (these were originally thought to represent two subspecies, but it seems that there is a gradation between the two and the size difference is secondary to growing conditions).

Bark is smooth grey-brown, with the hairy new growth a rusty colour. The alternate oblong or obovate leaves are 5 to 11 cm long by 1.5 to 2 cm wide with serrate (occasionally entire) margins. The flowers, which occur in autumn and winter, are cylindrical and can be various shades of blue-grey or greenish yellow in bud, opening to a yellow. Some forms, such as those at Catherine Hill Bay on the Central Coast of New South Wales, maintain a bluish green tinge after the flowers have opened. The spikes are 5 to 15cm high, and 4 to 5cm wide.

The seeds are enclosed in follicles attached to a naked woody cone and are generally retained within the cone until burnt. The species regenerates by re-growth from a lignotuber after fire, as well as from seed.

Banksia oblongifolia is uncommon in cultivation, though it is easy to grow in well-drained soils. It comes from a climate of summer moisture so should benefit from a little extra water in dry spells. The plant favours a position in full sun or dappled shade. Its smallish size suggests it would be well suited small gardens, either in the ground or as a container plant. 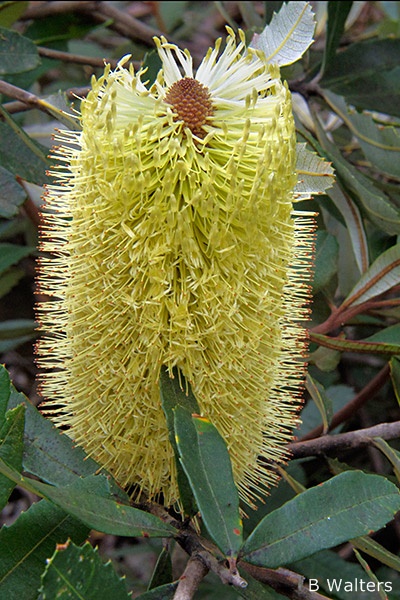 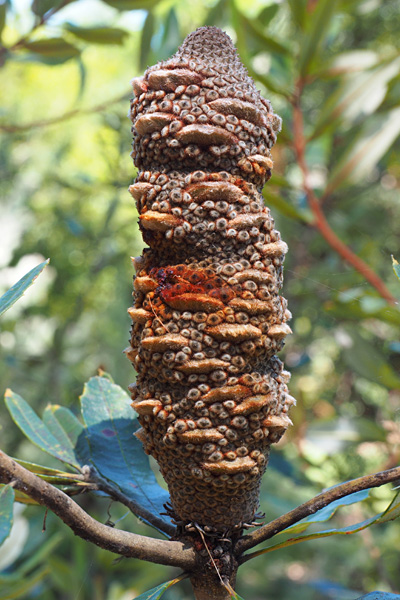 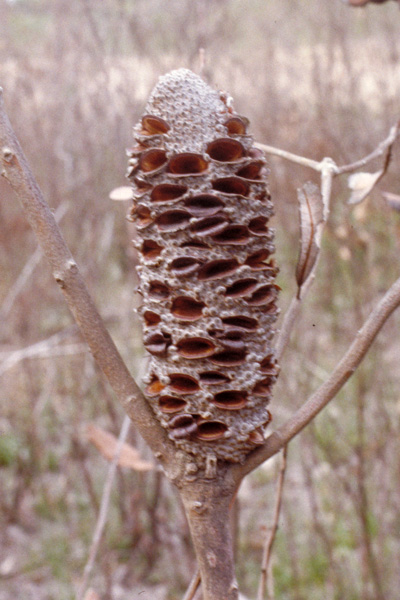