Calytrix depressa (formerly known as C.tenuifolia) is a small shrub to about 1 metre high of either a compact habit or spreading to about 2 metres. The leaves are linear in shape and up to 5mm long. The star-shaped flowers are 10-12 mm in diameter and may be yellow (common in southern forms) or purple with a yellow centre (northern forms). In common with most Calytrix species, a feature of the flowers is the “awns” or fine hairs which extend from the calyx lobes beyond the petals. Flowering occurs in late winter and spring.

Apart from C.tetragona (fringe myrtle), Calytrix has not received widespread cultivation. C.depressa should be reliable in well drained positions in temperate climates which have a fairly dry summer, preferably in a semi shaded position. Cultivation in more humid climates may be possible but plants will probably not be reliable or long lived in those areas.

Propagation of C.depressa is best from cuttings as seed can be difficult to germinate. Experimentation into the use of grafting has been carried out with Calytrix species using the closely related genus Darwinia as root stock. Some success has been reported but it is not known whether grafting of C.depressa has been attempted. 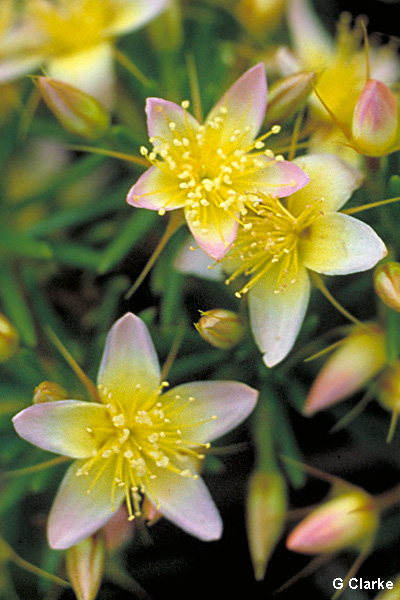