Banksia candolleana is a many-stemmed lignotuberous shrub up to 1.5 m tall and 2.5 m wide. The attractive green linear leaves are up to 40 cm long divided to the midrib into neat triangular lobes. Flowering occurs in autumn and early winter. The squat (ovoid) inflorescences are up to 4 cm high and 7.5 cm wide and generally golden yellow in colour. However the Banksia Atlas (1991) reported an unusual attractive pink-flowered form with green tips (photograph in the ‘Atlas’), and more recently Kevin Collins of the Banksia Farm has reported a red-flowered form. Flowering is followed by large attractive seed-bearing follicles.

B.candolleana has been grown commercially for the cut flower market in Mediterranean climates as far east as East Gippsland. It is otherwise uncommon in cultivation. The plant favours a position in full sun or dappled shade, and should thrive in a well drained soil and dry summer. Initially, it was reported to take up to ten years to flower in cultivation, however, later growers report flowering 3 or 4 years from seed. Studies have shown it to be fairly sensitive to rootrot. In common with most other western banksias, cultivation in areas with humid summers is likely to be difficult (though reports of cultivation in these areas are lacking).

Propagation from seed is relatively easy. Grafting may be worth trialling in humid summer areas using Banksia aemula or B.serrata, its two closest eastern relatives, as rootstocks. 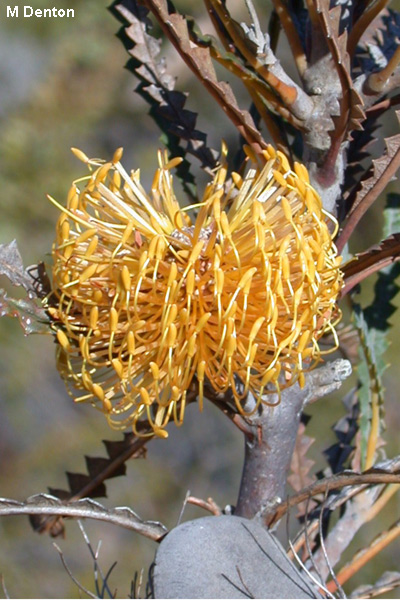