Although one of the older Callistemon cultivars, Callistemon ‘Violaceus’ is typical of some of the excellent, colourful bottlebrush cultivars and hybrids that have become available in recent years. Similar cultivars include ‘Purple Splendour’, ‘Purple Cloud’ and ‘Mauve Mist’. All of these form dense, bushy shrubs 2-3 metres tall by a similar spread, producing yellow-tipped purple brushes in mid to late spring (October to November). They are hardy shrubs which will withstand at least moderate frost and which flower best in a sunny position.

Like most Callistemon cultivars, C.’Violaceus’ produces viable seed which germinates easily. However, because of seedling variation, any plants produced from this seed will not be identical to the parent plant and cannot be called ‘Violaceus’. Plants produced from cuttings (which usually strike readily) will produce genetically identical plants to the parent. The mauve-red flowers appear in spring. 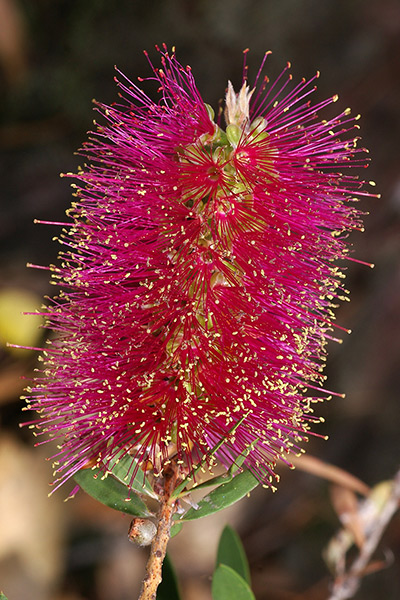