Carpobrotus is a genus of about 25 species which occurs in many parts of the world. There are four Australian species which are seen mainly in coastal areas, particularly on sand dunes near the ocean. The South African species, C.edulis, is naturalised in a number of countries, including Australia, and unfortunately has formed hybrids with C.rossii in many areas. These hybrids can be difficult to identify and are easily confused with the true C.rossii – see Waycott, M. (2016). Hybridisation in native pigface, Carpobrotus rossii. (State Herbarium of South Australia, Adelaide).

The common name of “pigface” which is given to the genus generally is supposed to refer to the resemblance of the flowers to a pig’s face…but a vivid imagination is needed to see the connection!

Carpobrotus rossii is common on coastal dunes. It is a prostrate plant which spreads to 2 metres or more with thick, succulent leaves up to 100 mm long. The flowers are superficially daisy-like and about 45 mm in diameter. They usually have mauve to purple petals and a white centre. The fruits are globular, about 20 mm diameter and dull red in colour. The fruits and leaves are edible.

This species is not common in cultivation but it can form an unusual and attractive plant for a well drained soil and full to partial sun. It is, of course, well suited to exposed, coastal locations.

Propagation is easily carried out from cuttings or by layering. Seed is also reported to germinate freely. 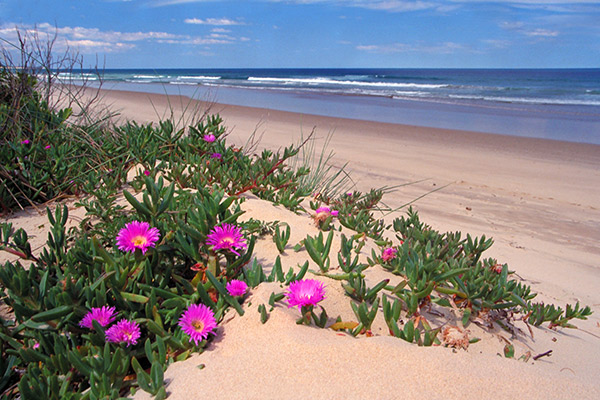 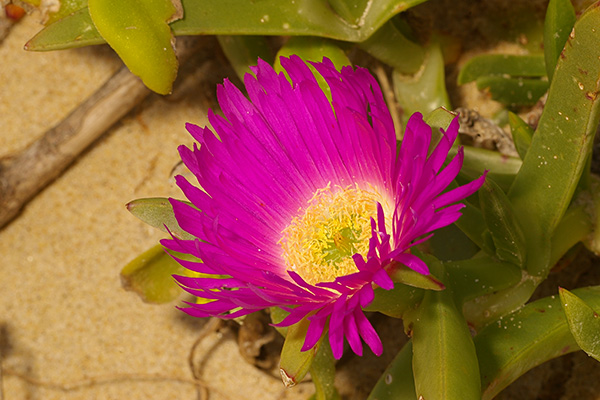