Chorizema is an endemic genus of about 18 species, all but one of which occur in the south west of the continent. They are generally small shrubs characterised by having very brightly coloured red and orange pea-shaped flowers, which give rise to the common name of “flame pea”. Pea flowers consist of 4 petals; the “standard”, the “keel” and two “wings” as shown in the diagram.

These plants (as well as Acacia) are often colonising species which germinate quickly after fires to stabilise the soil and to provide nitrogen (all are legumes able to “fix” nitrogen from the atmosphere in nodules on their roots).

Chorizema cordatum is the most commonly grown member of this genus and is a small, scrambling shrub usually about half a metre high by about a 1-1.5 metre spread. The elongated, heart-shaped leaves are about 50 mm long. The colourful pea flowers are relatively large (about 10-12 mm diameter), usually very brightly coloured in red and orange. Forms with pure yellow flowers are sometimes seen. Flowering occurs in late winter and spring.

Apart from the shape of the foliage, C.cordatum is similar to C.ilicifolium and hybrids between the two species are apparently in cultivation.

C.cordatum is best suited to drier climates with low summer humidity, however, it is hardier than many other plants from the south-west in humid areas. The species appreciates some protection from full sun as the flowers may suffer sunburn and performs best in well drained soils with assured moisture. It will recover from damage from light frost but is not suited to areas where moderate to heavy frost are experienced.

Propagation from seed is relatively easy following pre-treatment to break the physical dormancy provided by the impervious seed coat. Pre-treatment can be carried out by abrasion or by the use of boiling water (further details can be found in under the “Propagation” tab of the “Pea Family” page). The seed retains viability for many years. Cuttings strike well using firm, current season’s growth. 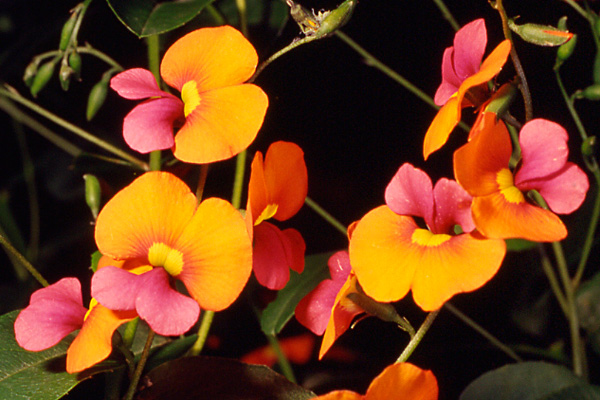