Darwinia carnea is known from only a few locations with fewer than 10 plants surviving in the wild. Grazing and agriculture have brought this species to the verge of extinction. The species is listed in the gazetted rare flora of Western Australia and is specifically protected by legislation.

Darwinia carnea is one of the “bell-flowered” members of the genus and is the only one of this type to occur outside of the Stirling Ranges near Albany on the south coast. Like other members of the group, the 8 (approx) small flowers are enclosed within large bracts which give the bell shape. Thus the “flower” is really a cluster of small flowers enclosed within the “bell”.

The species is a small to medium shrub. One form reaches about 2 metres in height while another form is low and spreading and less than 0.5 metres high. Leaves are linear and up to 15mm long. The bell-shaped bracts are commonly pale green in colour but may have a reddish tinge. They occur in late spring to early summer on the ends of the branches.

Seed of this species is unlikely to be available but germination is likely to be difficult in any case. The species can be grown fairly easily from cuttings. Grafting of this and other Darwinia species onto the hardy D.citriodora has been very successful and this is the preferred method of propagation. 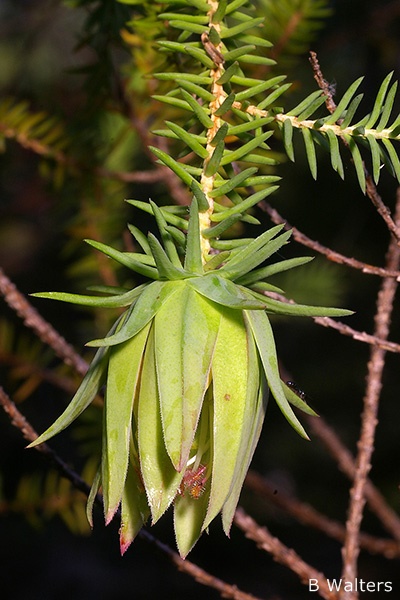