Dillwynia is an endemic genus of 20 or more species which are found in all Australian states. All are small to medium-sized shrubs having typical “pea”-shaped flowers usually in shades or yellow or orange. Similar closely related plants include Pultenaea, Phyllota, Aotus and Daviesia. Pea flowers consist of 4 petals; the “standard”, the “keel” and two “wings” as shown in the diagram.

he flowers of Dillwynia have a “standard” which is broader than it is high. These plants (as well as Acacia) are often colonising species which germinate quickly after fires to stabilize the soil and to provide nitrogen (all are legumes able to “fix” nitrogen from the atmosphere in nodules on their roots).

Dillwynia tenuifolia is now quite rare in nature, much of its habitat having been cleared for the development of the city of Sydney. It is a shrub to about 1 metre in height and spread. The leaves are linear and about 10 mm in length. The flowers, which appear in early spring (but may continue through until mid summer) are about 10 mm in diameter and are yellow with an orange throat. They occur in masses and provide a colourful display. After flowering, the hard seeds develop in small pods.

D.tenuifolia is not well known in cultivation due to its rarity in nature. It is suited to well drained soils in a sunny position but may not be especially long lived (perhaps 5 years).

Propagation from seed is relatively easy following pre-treatment to break the physical dormancy provided by the impervious seed coat. Pre-treatment can be carried out by abrasion or by the use of boiling water (further details can be found in under the “Propagation” tab of the “Pea Family” page). The seed retains viability for many years. Cuttings strike reasonably well using firm, current season’s growth. 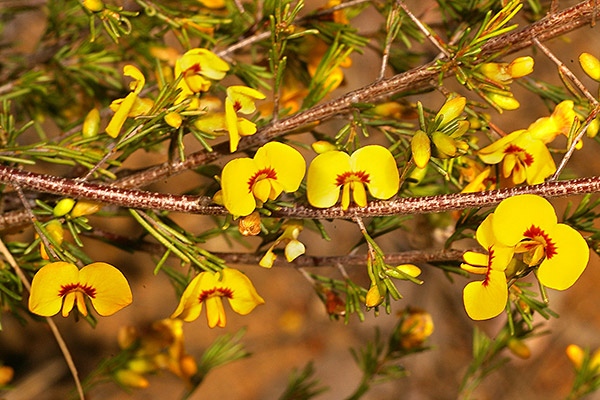