Eremophila mitchellii is a large shrub or small tree to 10 metres high with flaky bark. The leaves are linear or lance-shaped up to 60 mm long by 5 mm wide with an acute, hooked apex. The flowers are usually white or cream but pale pink forms are known. They are about 10 – 18 mm long, tubular in shape and with spots within the throat. They occur in the leaf axils and are mainly seen in spring. The fruits are egg shaped and about 7 mm long.

E.mitchellii is not widely cultivated but, like most eremophilas, it would be best suited to dry climates but should also be reasonably adaptable to more humid, temperate areas. It should grow on a variety of well drained soils, preferably in a sunny position.

In some areas of Australia it is a serious pest of grazing land. The species is not permitted to be grown in Western Australia.

E.mitchellii can be grown from cuttings of hardened, current season’s growth. 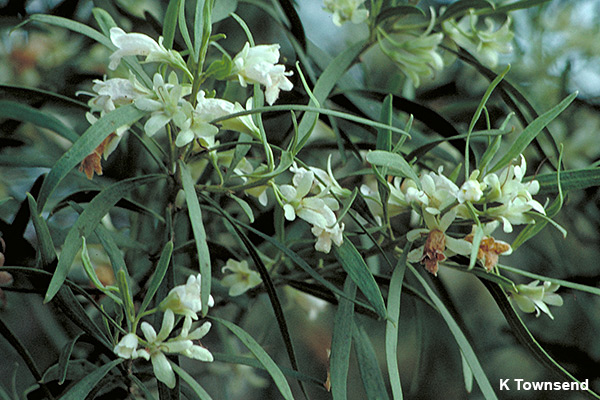