Eremophila youngii is one of the better known members of the genus and is popular among growers of Australian plants. It is an upright shrub which can reach 3 metres x 2 metres under good conditions. The leaves are linear to lance-shaped, up to 60mm long and slightly “hooked” at the tip. The pink to red flowers occur singly in the leaf axils and are tubular in shape to about 25 mm long. They generally hang downwards along the flowering stem. Flowering occurs mainly through winter and spring but some flowers may also be seen at other times.

Despite its desert occurrence, E.youngii has proven adaptable in a wide range of areas in well drained soils and full sun. It is likely to be less reliable, however, in sub tropical and tropical areas. Once established, the plant tolerates extended dry periods. It is also tolerant of at least moderate frost and responds well to pruning.

E.youngii can be grown from cuttings but these may not strike easily. 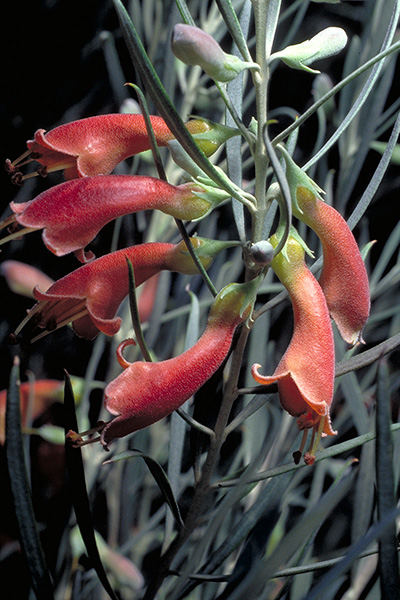