Grevillea beadleana is typical of the “toothbrush”-flowered grevilleas where the individual flowers are arranged in a terminal one-sided raceme. Although first collected near Walcha in north eastern New South Wales in the late 1800s, it was presumed extinct until rediscovered in the 1970s.

The species is a medium shrub reaching about 2.5 metres high by a similar spread. The leaves are olive green, about 100 – 150 mm long and deeply lobed. Unlike many other similar species they are not prickly and quite soft to the touch. The flowers are mauve to purple in colour and are seen mainly in winter and spring.

G.beadleana has been in cultivation since the early 1980s and it has proven to be reliable in reliable in well drained soils in sunny or semi-shaded situations. It tolerates extended dry periods once established and is tolerant of at least moderate frosts. It is a very attractive plant in both flower and foliage and it does not become too large for the average garden.

Propagation may be carried out from seed, preferably after ‘nicking’ the hard seed coat to slightly expose the embryo. Cuttings of firm, current seasons growth are also reasonably successful. 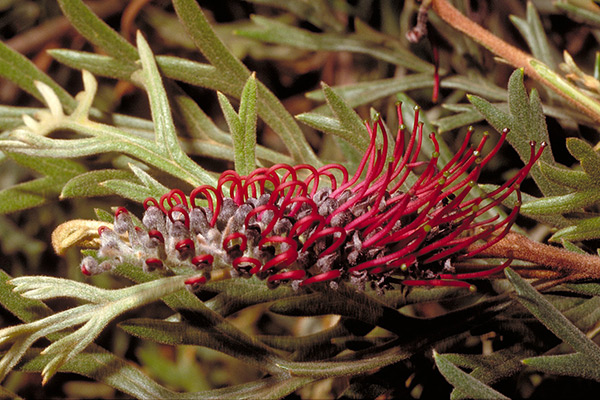