Hakea lorea comprises two subspecies – ssp. lorea and ssp. borealis. The differences between the subspecies are difficult to distinguish for the non-taxonomist although the fruits and flowers of ssp. borealis are larger. Ssp. borealis is confined to the Kimberly region of Western Australia and to the nor then parts of the Northern Territory, while ssp. lorea is more widespread and found in drier parts of all mainland states except Victoria.

Plants are quite variable in growth habit ranging from a medium, multi-stemmed shrubs to trees up to 10 metres high with corky bark. The greyish leaves are long and narrow, terete in cross-section and up to 60 cm long and 2-3 mm wide. The flowers occur from autumn to early spring and form pendulous racemes up to 150mm long in the leaf axils. The flower colour is cream or greenish yellow. Flowers are followed by woody seed pods containing two winged seeds, the usual number for all Hakea species.

Hakea lorea is uncommon in cultivation but should be suited to gardens in dry climates. It should be able to tolerate extended dry conditions once established but may be affected by frosts. The flowers are attractive to honeyeating birds and the species would be best grown in an open, sunny position.

The species should be easily grown from seed. The success of propagation from cuttings is not known. 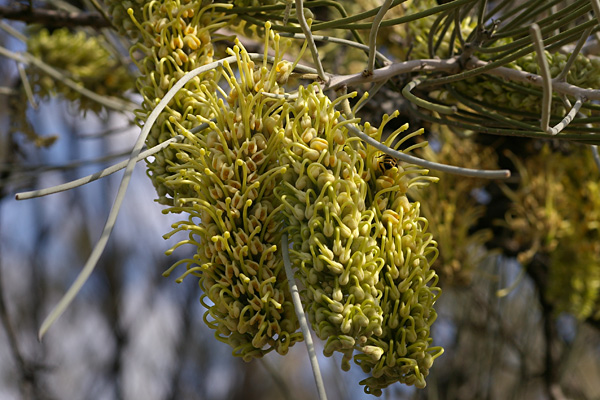