Hakea myrtoides is a small lignotuberous shrub to 0.5 metres high. It has small (2cm long) elliptical leaves ending in sharp points. The flowers, like many those of hakeas, are axillary (ie. arising on the stems from the leaf axils), and occur near the ends of branches, often resulting in an outstanding floral display of various shades of pink in winter and early spring. The flowers are followed by small, ovoid woody seed pods generally less than 1cm in diameter. The pods contain 2 winged seeds, the usual number for all Hakea species.

This species has much to offer as a rockery plant, but until now has been difficult to grow as it requires excellent drainage and, even then, has proven short lived in climates with summer moisture. It prefers a situation is full sun or partial shade. Unfortunately plants often suffer dieback of foliage which detracts from their appearance.

Hakea myrtoides may be grown from seed without any pre-treatment but seed is not often available. The species can also be grown from cuttings but these may not be particularly easy to strike. Grafting of the species onto the eastern species H.salicifolia has proved to be very successful and has enabled the plant to be grown in previously unsuitable areas. Grafted plants may sometimes be available from specialist Australian plant nurseries in eastern Australia. 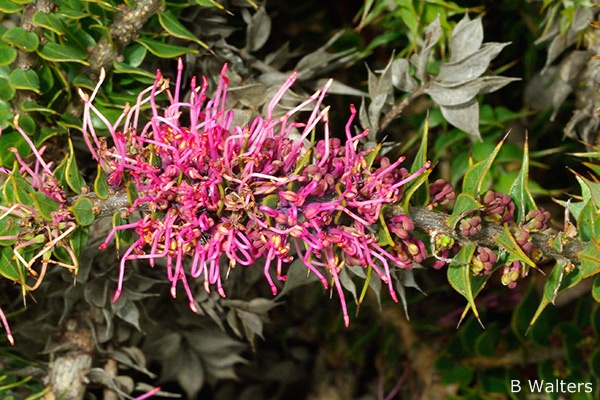