Hibbertia stellaris is a small shrub, usually less than about 0.5 metres high with small, linear leaves to about 20mm long. The yellow or orange flowers are profuse and occur in the leaf axils on short stems. The species is found in swampy areas in winter-rainfall districts.

This species has been in cultivation for many years and is a very desirable and showy plant which does not require a great deal of space. Unfortunately it is usually short lived in cultivation, particularly in areas with wet or humid summers. However it is easily propagated and can be treated as an annual. It requires sunny or partly shaded locations and, despite its natural occurrence in swampy areas, requires very well drained soils in cultivation. It will tolerate at least moderate frost. It makes an excellent container plant where it may be grown as a ground cover in the same pot as a larger, and more permanent, plant.

Hibbertias, generally, are easy to grow from cuttings and H.stellaris is no exception. The species can be grown from seed but this is not readily available. 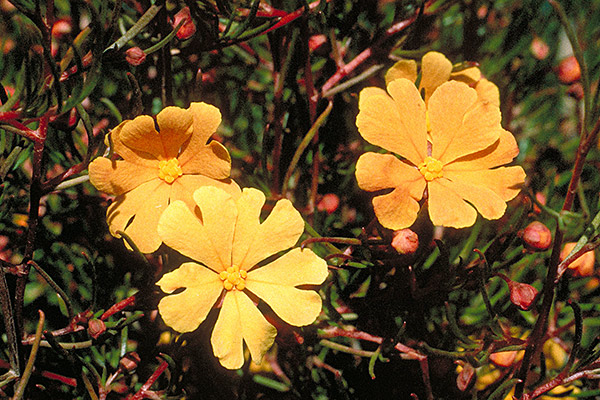