Indigofera is genus of about 700 species of which about 30 are found in Australia. The most commonly encountered species is I.australis.

Indigofera australis is a small to medium shrub, often of upright and straggly habit. The leaves are pinnate, 50-100 mm long, with up to 21 egg-shaped to narrowly oblong leaflets which are slightly hairy. The flowers occur in elongated clusters from the leaf axils. They are pea-shaped, pink or purple in colour (occasionally white) and about 12 mm across.

Pea flowers consist of 4 petals; the “standard”, the “keel” and two “wings” as shown in the diagram. Flowering occurs in late winter and spring.

This is a fairly variable species and some forms make better garden subjects than others. It is a hardy plant in most well drained soils in full sun or (preferably) semi shade and is tolerant of at least moderate frost. Plants can be pruned fairly heavily to make a more compact and leafy shape but pruning into old wood should be avoided. Plants will withstand extended dry conditions once established but adequate watering improves appearance.

Plants usually produce plentiful seed and propagation from seed is relatively easy following pre-treatment to break the physical dormancy provided by the impervious seed coat. Pre-treatment can be carried out by abrasion or by the use of boiling water (further details can be found in under the “Propagation” tab of the “Pea Family” page). Cuttings should also be successful. 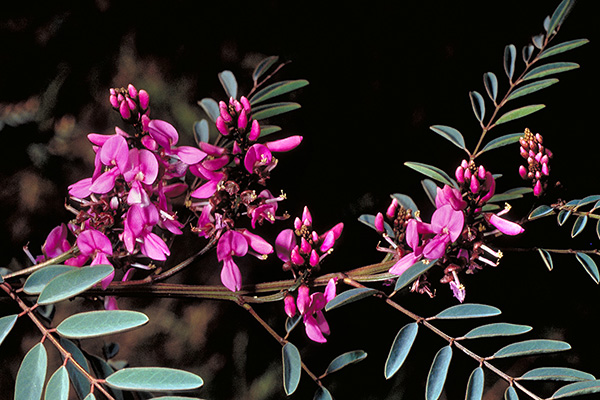