Kunzea pulchella is usually an erect or spreading shrub to about 1 – 3 metres in height with grey-green, ovoid-shaped leaves to about 15 mm long. The flower clusters are very profuse and conspicuous, usually bright red in colour with gold-tipped stamens. White and cream flowered forms are also known. Flowering occurs usually in late winter to spring. The flowers are followed by small 1-celled fruits which release numerous small seeds when ripe.

This species has been in cultivation for many years. It is particularly suited to Mediterranean climates (dry summer – wet winter) but will also grow in more humid climates (eg. it has been successfully cultivated in the Sydney region). The plant requires excellent drainage and a sunny or lightly shaded position. It withstands at least moderate frost.

Propagation is easy from both seed and cuttings. If seed is being collected, the plants need to be kept under observation or the seed will be lost. Plants grown from seed may take several years to flower and it is best to propagate from cuttings taken from a mature plant that has already reached the flowering stage. Cutting-grown plants should flower within 2-3 years. 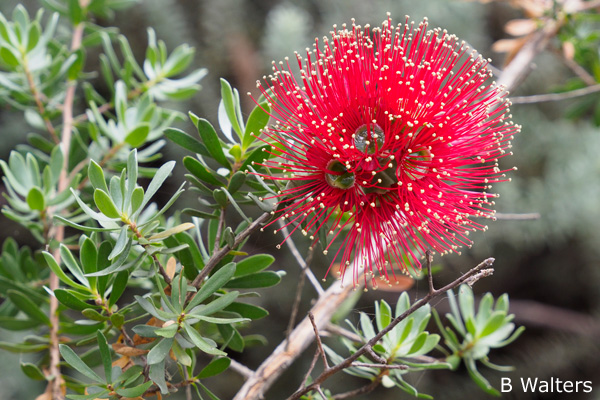