Melaleuca incana is one of the most widely cultivated members of the genus and is well established in general horticulture. There are at least two recognised subspecies: subsp. incana and subsp. tenella. The latter was formerly M.tenella. The differences between the suspecies are fairly subtle – subsp. tenella is found further east than subsp. incana although the two subspecies apparently overlap in distribution near Albany. A third unnamed subspecies has a restricted distribution on the far south-west coast.

The species forms a small to medium shrub, usually of weeping growth habit to about 2 – 3 metres. The flowers occur in small, bottlebrush shaped spikes about 3-4 cm long and are cream or white in colour. Flowering occurs in spring.

The leaves are elliptical to oval-shaped, about 10 mm long and softly hairy.

Although native to a dry summer climate M.incana is one of the more adaptable of the western species in the wetter summer conditions of Australia’s east coast. However, it requires adequate water during dry periods or it can develop a sparsely foliaged appearance. It can also be affected by scale. The plant requires a well drained, sunny position and responds to annual fertilising after flowering. Pruning should be minimised as this can spoil the weeping habit. 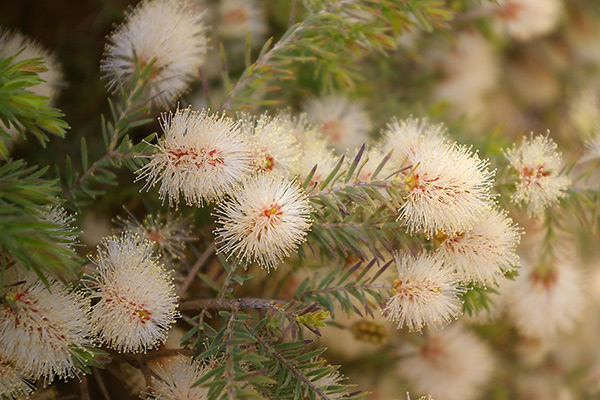