Nuytsia is a monotypic genus which occurs naturally only in Western Australia. The plant is at least partly a root parasite in that its roots attach themselves to the roots of other plants and gain part of their growth requirements from the host species. It is reported that plants up to 150 metres away from N.floribunda may be parasitised.

Nuytsia floribunda is a tree up to 10 metres high of upright habit. In summer it becomes covered in spectacular golden flowers which occur in clusters on branched inflorescences and which occur over several months.

Despite its obvious attractions, N.floribunda is not often cultivated due to the difficulty in propagation. As a result plants are almost never available through nurseries but there have been isolated reports of successful cultivation in Western Australia. One grower reported success by sowing seed in situ in the garden using couch grass planted nearby as a host. Another report indicated that cutting-grown plants using the exotic, deciduous crepe myrtle (Lagerstroemia sp) as host showed considerable promise.

Propagation from both seed and cuttings is reported to be relatively easy but plants generally do not survive more than a year or two. Further research into the relationship between N.floribunda and its host species is required. 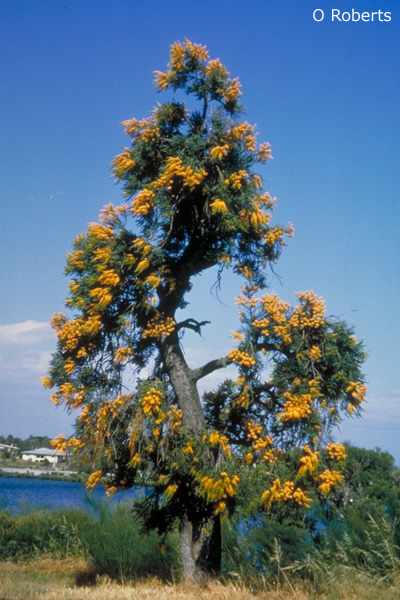