Phaius is a small genus of about 20 species of evergreen terrestrial orchids, three of which occur in Australia.

Until relatively recently, Phaius australis was classified as P. tancarvilleae but plants formerly ascribed to that species have been reclassified as P.australis in the Australian Plant Census. The other Australian species, P.bernaysii and P.amboinensis were also previously included in P.tancarvilleae (which is now considered to be a related species found in parts of Asia).

P.australis is the most widely cultivated of the Australian species. It is a robust plant with elongated, oval shaped leaves up to about a metre or more long and flowering stems which may reach 2 metres. The flowers are the largest of any Australian orchid and occur in clusters of between four and twelve. The individual flowers are about 100mm diameter and are reddish brown and white in colour. Flowering occurs in spring.

Unlike most Australian terrestrial orchids, P.australis is easily grown. It does best in a large container with a potting mix which is high in humus content. It prefers a position in semi-shade.

P.australis is easily propagated from seed and may also be propagated by division of the clump. It is also reported that new plants can be obtained by cutting the flower stem into pieces and placing them on a moist surface. 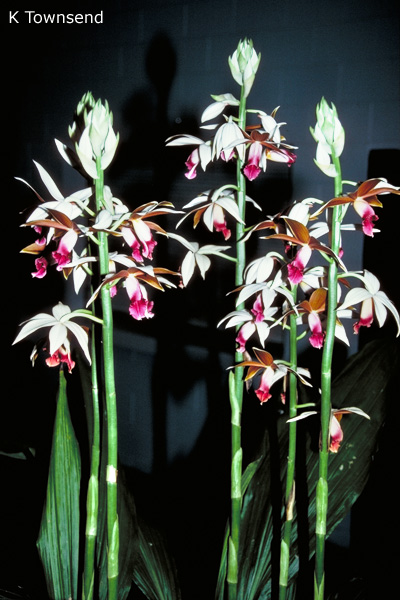