Xerochrysum is a small genus of six species, all of which were formerly classified in the genus Bracteantha. Xerochrysum subundulatum was formerly known as Bracteantha subuldulata and, prior to that it was known as Helichrysum acuminatum, a name which was invalid as there is a South African species with the same name. The latter name (H.acuminatum) is still found in many publications.

X.subundulatum is one of the most spectacular members of the daisy family. It is a low-growing perennial species which, in its natural habitat, often occurs in extensive mats. Individual plants are about 300 mm high and may spread to about a metre in width. The leaves are narrowly elliptic in shape to about 80 mm long.

As with other everlastings, the individual flowers are very small but are formed into a large cluster surrounded by large papery bracts. The overall appearance is that of a large, single “flower” with the bracts as the “petals”. The flower heads appear in late spring through to autumn and vary from yellow through to orange.

Orange everlasting is not often seen in cultivation as it has proven to be difficult to maintain at low elevations. It is suited to cold climates and is very tolerant of frost – in its natural habitat it may be covered by snow for many months. It is reported to prefer moist, well drained soils in a sunny position and it resents drying out. It is also suited to growing in containers and the flowers last well when picked.

Propagation of X.subundulatum from seed is not difficult and cuttings also strike readily. 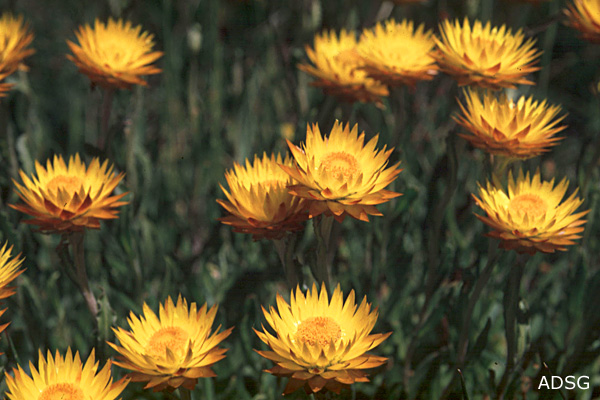